Project Director and Professor of Photography and Art and Ecology

Meridel Rubenstein, MFA, conceptualized Eden In Iraq as a symbolic restoration of the fabled Garden of Eden. The Marsh Arabs are a preeminent example of refugees returning from exodus to their homeland.

Rubenstein has been an adjunct Professor in the School of Sustainability at Arizona State University from 2015 up to the present. Rubenstein was a Visiting Associate Professor at the School of Art, Design, and Media at Nanyang Technological University 2007-18, where she taught  Art & Ecology and Contemporary Landscape in the photography department. She is also an internationally recognized artist/photographer working at the intersection of nature and culture, especially in relationship to ecological and social imbalance. Her photography, site-specific installations and research practice demonstrate skilled communication and collaboration with distinct groups around cultural and environmental issues. She has received numerous grants including a Guggenheim Fellowship, and her work has been featured in exhibitions and publications worldwide. Her art and design studio is in Santa Fe, New Mexico, USA.

She began photographing environmental remediation in 2006 during the Green Belt Movement in Kenya under Dr. Wangari Maathai, as well as in Madagascar with field biologist and Macarthur fellow Dr. Steve Goodman. In 2007, she collaborated with Dr. Dan Schrag, Director of Harvard’s Center for the Environment, on poetic visualizations of Carbon Cycles.

Rubenstein’s projects often combine art and science and speak to dispossessed cultures. Critical Mass (1989-93), was a collaborative project and traveling museum exhibition that took as its subject the meeting of nuclear scientists and Native Americans during the making of the first atomic bomb at Los Alamos, New Mexico. In 2000, she photographed the oldest trees in the US and Vietnam to make an extended work about the American war in Vietnam and the resilience of the natural world.

Rubenstein’s photoworks and videos from Southern Iraq have been featured in many exhibitions, including the solo exhibition, Eden Turned on its Side, at the University of New Mexico Fine Art Museum in Albuquerque, New Mexico, USA, (2018), with a monograph (UNM Press) featuring an essay by environmental journalist Alan Weisman. 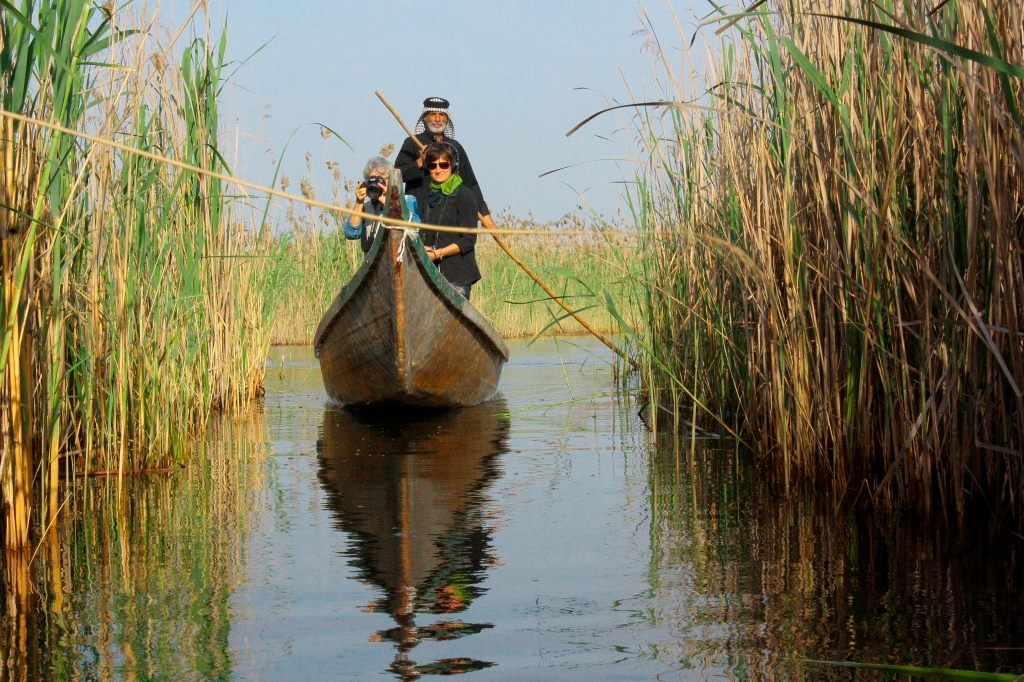 Meridel with Camera in Iraq Marshes 2014   Photo by Jassim

Davide Tocchetto, Co-Director, holds a PhD in environmental agronomy. Presently, he is a lecturer of Agronomy at an Italian high school. He developed his first career at Padova University with research in sustainable agriculture and wastewater treatment with constructed wetlands. He was a founding member of a University start-up to develop a water treatment patent. He was awarded an Innovation Prize for the “Techia” floating wetland patent and the “2008 Startup of the Year” prize in Italy. Tocchetto won the local entrepreneur prize for his project to develop a farm and cultivate ancient and minor fruits.

He is a freelance partner with numerous national and international companies in developing varying projects in different fields of operation outside of Italy (e.g. crop and vegetable production in Senegal, rural development in Brazil and water treatment in Algeria and Slovakia). He was also partner in the United Nations project “Green School for Gaza” where he studied and developed (with MCA Architects and UNRWA) the whole water circle and reuse system in a new school in the Gaza Strip. He has been a speaker at various national and international conferences, sharing his knowledge about wetland treatments and sustainable agricultural practices.

Jassim Al-Asadi, ENG, is the managing director of the regional Southern Iraq office of Nature Iraq (NGO). He has a Bachelor of Science in Engineering from the University of Technology, Baghdad, 1980, and extensive work experience as an engineer on water remediation projects throughout Iraq. He was Director of the socio-economic studies section for CRIM (Center for Restoration of Iraqi Marshlands) from 2003-05, and for MoWR (Ministry of Water Resources) from 1985-2003.

Throughout the past ten years, he has participated in numerous international meetings and conferences on the Iraqi wetlands, held in Switzerland, Italy, Jordan and Egypt. He also participated in preparing studies and surveys of the green villages, and the Strategic Plan for the Wetlands, the architectural sites in Iraq and the infrastructure planning in Southern Iraq.

He has lectured internationally: at the Work- shop on Sustainable Communities, Cairo, 2006, UNEP meetings with Iraqi MoWR, Amman 2004, the International Conference of Donor Nations on Iraqi Marshlands, Venice, Italy, 2004, and workshops in Iraq related to the Iraqi Marshlands 2004-2012. He was a driving force at Nature Iraq responsible for bringing the designation of the UNESCO World Heritage Site to the marshes and the ancient sites in 2016. He frequently hosts State and World leaders in the Edenic marshes.

Founder and Chairman, Institute of Ecotechnics

Mark Nelson, PhD, is a founding director of the Institute of Ecotechnics and has worked for several decades in closed ecological system research, ecological engineering, the restoration of damaged ecosystems, desert agriculture and wastewater recycling. He is Chairman and CEO of the Institute of Ecotechnics (www. ecotechnics.edu), a U.K. and U.S. non-profit organization, which consults to several demonstration projects working in challenging biomes around the world, and head of Wastewater Gardens International (www.wastewatergardens.com). His most recent books are “Pushing our Limits: Insights from Biosphere 2,” (University of Arizona Press, 2018) and the 2nd edition of “Life Under Glass: Crucial Lessons in Planetary Sustainability from Two Years in Biosphere 2” (Synergetic Press, 2020).

Dr. Nelson has helped pioneer a new ecological approach to sewage treatment, “Wastewater Gardens®” which are constructed subsurface flow wetlands with high biodiversity and has created over 150 such systems in Mexico, Belize, Bali & Sulawesi, Indonesia, West Australia, France, Spain, Portugal, Poland, the Bahamas, the Philippines, Algeria and the United States since 1996.  He was awarded the Yuri Gagarin Jubilee Medal, 1993 for outstanding service to international cooperation in space and the environment by the Russian Cosmonautics Federation. He is a Fellow of the Royal Geographical Society, the Explorers Club and the World Academy of Arts and Sciences.  Dr. Nelson’s book on the importance of ecological treatment and re-use of human wastes, “The Wastewater Gardener: Preserving the Planet One Flush at a Time,” was published  by Synergetic Press  in 2014.  Pages 197- 201 feature an essay on the Eden in Iraq Project with photographs by Meridel Rubenstein. A version of this article appeared in Solutions Magazine in July 2014.

Zahra Souhail, Project Manager, is a Dutch-Iraqi, born in Baghdad and raised in the Netherlands. She is a certified project manager with more than 10 years of professional experience working at some of the largest corporations in the Netherlands including Achmea and presently for the Municipality of Amsterdam.

Having survived war and turmoil in her native country, Zahra is passionate about civil society and volunteering. She is a firm believer in the importance of education and knowledge exchange in the development of children and societies at large that have suffered from conflict and violence.

In 2018, Zahra organised a fundraising campaign for the Iraqi House of Creativity; an orphanage organisation that looks after housing and educating 300 street kids in Baghdad. Zahra is an advocate for preserving Iraq’s rich historical and natural heritage. Since 2018, Zahra has been a contributing member and Project Manager of the Eden of Iraq Wastewater Garden Project, a humanitarian water remediation project to provide urgently needed health and clean water for southern Iraqis, their children, and future generations to come.

Fluent in English, Arabic and Dutch, Zahra is a keen explorer and has visited more than 40 cities around the globe. Traveling satisfies her curiosity about different people, cultures and history.